My Deep Regret : Not able to Help a Woman who faced Attempted Rape by her Boss: At Human Right Commission, Jumla

My Deep Regret : Not able to Help a Woman who faced Attempted Rape by her Boss: At Human Right Commission, Jumla

by Radha Paudel
April 2013, I was in office of Radio Nari Aawaj, with local women activist in Jumla. A woman called Menaka Pokhrel  (here I disclosed her name because she allow to disclose, hereafter survivor) wanted to meet chief of Safe House, Bhagwati Shrestha, seeking support against attempted rape by her office chief (hereafter perpetrator).
She shared all stories;
We all went to the police office, met woman and man police inspector, office time already over so dispersed to meet next day.
Next day, I had already talked with DIGP Bimla Thapa, few activists, lawyers in Kathmandu  though the case was not registered. Man Police, inspector called perpetrator and asked for resolved. He also called to local women activists, perpetrator also threatened, blamed to them as well. Meantime, I also called Gauri Pradhan , in Kathmandu. He also NOT happy with me and said what type of case you were supporting?  Later, I was quite busy to receive many , phone calls, meeting people and women activists , they all were saying I took forward this case otherwise no women had have voice in Jumla. I got threaten phone calls too.
I started to work in Jumla since 2001, I never like to build dependency among the local leaders.  Before I left Jumla, an investigation committee also was in Jumla from  National Human Right Commission.  Finally case was registered at police office, took five days to registered.
In the beginning, local women leaders were really working so hard, updated me, asked me the suggestions. They  meet press, met BAR association and others. Local women leader also resigned from their women’s network at police office. 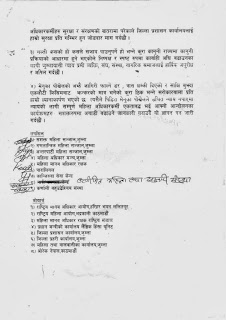 However, except women leaders and few journalists, majority of the stakeholders police, lawyers, journalist, politicians etc all were on side of perpetrator.  It means that case didn’t get space in media and anywhere. I keep on receiving many phone calls.
Women leaders are not unified, not properly skilled, politically divided , manipulated very easily, hesitate to take stand, low confidence etc so they didn’t like to continue the support to Survivor.
Later, I asked to forward all documents and shared with WOREC, NAWHRD and about more than 50 journalist. I spoke myself with many of them. But no one ready to take this case forward (The reason myself and my organization was not talking lead role because my organization doesn’t have a single money, whatever my organization is doing, doing by passion and commitment at voluntarily basis.  Further, myself is a member of WHRD, my organization is working with NAWHRD and WOREC. So referring to these institution is not also wrong at all. I always considered that WOREC is the parent organization to work on GBV in Nepal.
I didn’t see any progress, then survivor came to Kathmandu. I suggested to her o meet NAWHRD, WOREC and Dr Renu Raj Bhandari. Survivor and Dr Renu were worked together at national Human Right Commission when Dr Renu worked as Rapporteur.  Survivor went there, met all in May 2013.
Survivor again called me in June 2013 when I had had accident but I was keep on thinking about her. I also do not see any interest among women local leaders who were together in the begging. But, there is rumor that this case was manipulated by Radha and so on.
I have experienced of various forms of gender based violence (GBV) since childhood. It took long to realize the GBV and confidence to fight against it. I also engaged to support when I started my professional career though I didn’t have formal education on GBV before 2011.
When I started my full time career in Action Works Nepal, I actively engaged in fighting against GBV. Everyday, I worked on GBV for response and prevention in a way another. Usually, senior, educated women and men consult me.
Today, 10thday of  16 days VAW activism 2013. It is right after the election for Constitutional Assembly II. Almost all media are working on GBV, 16 days VAW and organizing various activities around GBV and women’s participation. I felt so guilt, remember to Survivor  almost every day. She dared to disclose the situation but no one ready to support at all. About one month ago, I called her but she didn’t respond. I thought she changed her mobile number.
Today, 5 December 2013, again I called her and know about the following facts;
I do not have any complaint towards the local women leaders because they are depressed, deprived and divided politically. I feel sorry with Local Women Leaders, Human Right Commission and lawyers who asked the evidence against attempted rape. Shame L
Here my conclusion:

How much structural patriarchal society we have specially in rural region e.g. Jumla

No one ready to take actions, power oriented, working on comfort zone L

Nepal’s justice mechanism is too biased, lengthy and not survivor friendly L

Lack of skills, knowledge and mechanism on GBV response and prevention in Jumla

Long way to go for fighting GBV specially in rural areas
Request: This is the long story, if anyone like to know please feel free to contact, I will connect with Survivor