by Radha Paudel
It is historical and tremendous pleasure that Nepal criminalized the Chhaupadi by Legislature Parliament August 9, 2017 (Ref:http://www.myrepublica.com/news/25343/). I was in National Reconstruction Authority, Nepal Government for sharing my thoughts on dignified menstruation or why the menstruation is human right concern and role of engineers while doing reconstruction work over earthquake affected areas. I overwhelmed by receiving many phone calls, message on my mobile for congratulating me and have same in social media. Of course, I was happy and proud, remembering all daughters, sisters, mothers who lost their lives due to menstrual restriction specially at shed as well as who are living with broken heart due to traumatic experience from various forms of abuses and discrimination due to menstrual restriction across Nepalese community. The conclusion of my friends is happy due to legal act and other side of coin doubt due to link with belief system as well.
I have disagreed with both idea.
1. I am happy because something is better than nothing. It gives confidence , created safe space  to all stakeholders who are working around dignified menstruation. It is totally differing from outlaw of 2005 or 2008. The outlaw is only a guideline. In a decade more history of outlaw, none of the case reported due to menstrual restriction or Chhaupadi except the case of association with police case due to rape or murder or death due to snake bite. Even though these reported cases are only the tip of the iceberg. Last week, when my friends and myself attempted filing the case of death due to snake bite at shed, took more than a day due to not having specific legal provision as well as received various forms of threatens. Thus, it’s is really good start.
As global practice, except few organizations and activists, Nepalese NGOs started to work on menstrual hygiene since 2014 only when the UN, Human Right Council declared that the menstrual restriction is key barrier for gender equality. But, mostly they focused on toilets or infrastructure. Indeed, menstruation is beyond infrastructure. In other hand, NGOs and activists, do not see the direct connection between menstruation and Peace, human right, empowerment and lately with sustainable developmental goal. In this connection, this legal act create avenue for those people to work from comfort zones or projects.
2. But, this civil code or legal provision is very narrow by nature. Because it is failed to define the scope or dimensions of Chhaupadi. Chhaupadi is practicing across globe where Nepalese community resided whereas civil code defined or confined with west or far west and mid-west Nepal. Here, government seemed to address for clean sheds. Clean shed is not solution. It doesn’t ensure dignity, right to food, health, freedom, housing, healthy environment, touch ability and non- discrimination, women, education, employment as provisioned by Nepal’s new constitution. In other hand, the government puts another layer of discrimination again to far west and mid- west Nepal. More importantly, it institutionalizes the sets of restrictions (in touching, food, entering/mobility where Chhaupadi falls under touching and entering associated with almost more than 40 rumours /myths) across Nepal. Ironically, this legal act is controversial with government’s leave for the cleansing ritual (Rishipanchami) which approaching by next week. It happened due to the lack of knowledge and understanding about menstruation or menstruation is considered as only women of west Nepal’s issue. 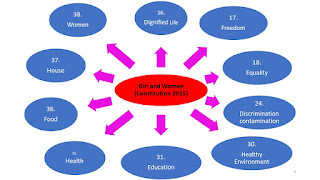 3. Regarding the enforcement:  Many of my friends expressed their doubt as like caste practice. Even the caste system, we achieved a lot and have to go long for equality. The entire Nepali culture is so feudal, corrupt or lack of accountability at personal and relational level.  Despite all visible and invisible difficulties, here, I am hopeful even in enforcement. Thinking about failing is perfect example of poor mind set and not ready to transform as individual level. Globally, none of the act enforced by 100%. There is always misuse of power, extremists and others. The rural people are easier to educate and empower compare to educated and urban based people (de-learning). As like other campaigns, many senior staffs are demonstrating high level of ignorance and resistance in menstruation. Now, the girls and women gained confidence to think about their body and blood and challenge to tradition. There are many girls and women who are already showed their confidence and bravery by hiding the menstruation or breaking the cultural code. We often fail to recognize these girls and women and celebrate their victory. We must not back and must not wait the next generation because we are the people of mobile technology which robust the enforcement. Here, we should not forget or ignore the dramatic progress in politics (democratization) and its impact on women’s life. How many days, the political parties, leaders and academia can be remained silent in this issue.  Likewise, once the society is getting open and rational, the faith healers also would come on board whereas the religious books also would contextualize accordingly.
More importantly, this is the high time to review our work on gender based violence or child marriage or economic or political empowerment or peace or education. Why do we failed as we invest our time and resources? It is because of not speaking the menstruation which is one of the key underlying cause for all. Dignified menstruation is core heart of all activities so everyone should work on menstruation if she/he work for peace, human right and empowerment and let’s enjoy the nature with the help of science and technology.
.