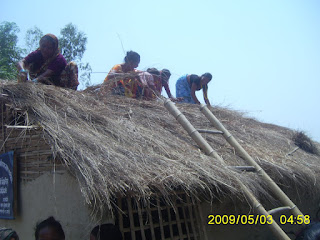 Women of Sarlahi district (identified as poor, vulnerable and socially excluded through participatory tools by themselves where used class, caste, gender and other tools were used).

Most of the women are single by death of husband, migration of husband and so on. Every year, such hut has to repair as well as make. It is also allow by ONLY to men. In this connection, many women are suffering from sexual abuse and exploitation. Through opular Education discussion, women aware about it. It a forms of violence of women’s right. Then women start to make it by themselves. NO MORE violence ! women can DO.

I have Right, I can Exercise