When I was studying at grade four, I heard and observed that many very young girls were getting married in my village, said by 18 years (her parents and neighbours hadn’t agree with her age, claiming 19 years) young, Terai Dalit girl named Rinku Thakur from Chhapkaiya 1, Birgunj, Parsa. She further added, I also heard about committed suicide by many young girls and women due to early, force marriage and other forms of domestic violence. She was quite worried since then due to fear of child and forced marriage in her culture and society. Being an eldest (#1-Rinku 18 years, “2-Brother 16, SLC attempted, #3- Sister 14 years 10th grade, #4- Sister 11 years at 7thgrade) she is more vulnerable who must follow her parents peculiarly marriage without a single comment in many ways e.g. her marriage is a matter of honour in her society in order to continue the culture of this community.

Nepal has one of the highest child marriage in the world where 41 % (UNICEF, 2015) adolescent girls get married before the age of 18 years due to gender discrimination, poverty and culture. According to the land of law, the 20 years old is the legal marriage for both women and men or 18 years with parental consent (2010) and defined up to three years imprisonment and £102 as fine as punishment for child marriage though there is merely zero of enforcement of the law. Currently, the national strategy formulated on it as well.

Her parents supported her wish when she denied to marry when she was in grade 10. Sadly, it wasn’t remaining same and fixed her marriage with seventh grade boy who is working as carpenter in Ghodesim, India in March 2016. They also paid for Dowry equivalent USD $ 1200. Her persistent fighting didn’t work out. When she felt hopelessness at family, she shared this issue with her colleagues at Terai FM where she worked as part timer. Because she neither like to commit suicide nor faced to various forms of violence as others as she has been witnessed since childhood.  She does fully aware that girls and women do not have single voice, treated as less than animals or goods, suffering from various forms of domestic violence. She encountered the verbal, physical, emotional torture from her parents, uncles, aunts and neighbours since long regarding her marriage. 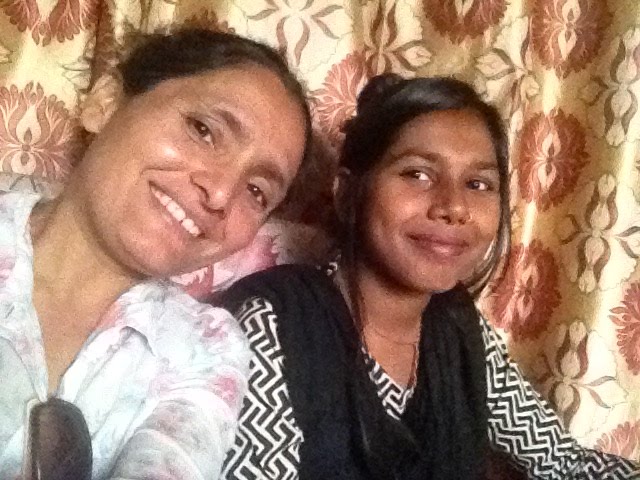 Radha personally went to Birgunj to honour Rinku for her bravery
(Note: Would extends sincere thanks to Rinku, her family members, neighbours, journalists, SP Rajbabu Shrestha, Assist CDO, WCDO, Pawan Tiwari, Pramod Karna, Preeti Karna, Pralad Giri, Suresh Giri etc.
Special thanks to Dinesh Chandra Giri for coordinating with stakeholders, taking care of my local transport, food and accommodation.
I am so sad by seeing the reaction of stakeholders when Rinku was in Media at April 7 2016. To me she is the highest personality. Finally, I determined to meet her to extend my salute, hugs, love, solidarity. So I went to Birgunj in public bus in April 29, and returned May 1, 2016. I have dying dream to educate and empower Terai girls since 2005 but still not able to make significantly due to financial resources.)